Ann Coulter would like Appleton to celebrate Joe McCarthy, not Houdini 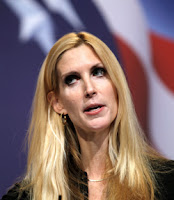 Not many people know that Houdini's hometown of Appleton, Wisconsin, is also the birthplace of Sen. Joe McCarthy. But conservative harpy Ann Coulter knows it, and in an interview on FOX (where else?) she used Appleton's celebration of Houdini over McCarthy to illustrate a point about "the elitism and idiocy of the left."

So maybe they should rename the new Houdini Plaza "McCarthy Square"?
Written by John Cox at 9:17 AM