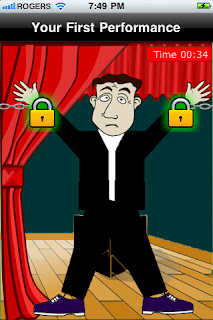 Monster Theatre has released a free game app for iPhone as part of the promotion for their touring show, Houdini's Last Escape, starring Christopher Bange and Tara Travis in a comedic take on Harry and Bess.

You can download the Houdini's Last Escape game app FREE from the Apple App Store on your iPhone or at App Shopper.

Visit the Monster Theatre's official website for the full tour schedule for Houdini's Last Escape.
Written by John Cox at 7:09 AM