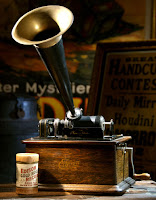 HOLY CATS! Dean Carnegie reports on his blog Magic Detective that David Copperfield played a NEW recording of Houdini's voice while giving a video tour of his collection for members of the just completed Essential Magic Conference 2011.

As Dean describes it, the recording is of Houdini giving a slightly different reading of his Water Torture Cell patter from the recording that we are all familiar with today.

Says Dean, "The speech pattern is almost identical. However, there was one giant give-away when on the Copperfield clip. Houdini is heard to say "after it has been filled to the brim with water." But on the clips you can find on youtube and other places, Houdini says "after it has been filled with water". NOT 'filled to the brim', but just 'filled with water'. There are a couple other changes in script as well, so it is a different version."

The existence of this second recording is not generally known, but not a mystery. The original L.A. Times report on the discovery of the Edison wax cylinders in 1970 mentions two recordings of the USD patter on separate cylinders. The other cylinders, six total, are said to contain recordings of Houdini's sister, Gladys, reading a poem, and Houdini re-reading it in German. Oh to hear those!

Thank you, Dean. And thank you, David Copperfield! 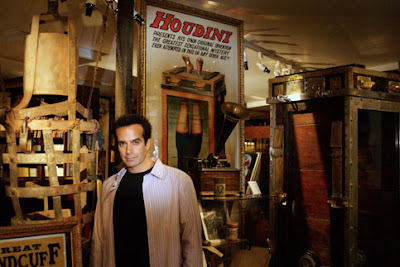 UPDATE: Hear 30 seconds of the alternate Houdini voice recording.
Written by John Cox at 11:33 AM