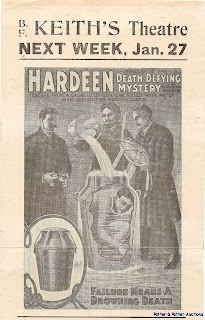 Check out this Hardeen broadside that sold yesterday on eBay for $128.50. In it we get a good look at Hardeen's Milk Can poster which, of course, is identical to Houdini's Milk Can poster only with Hardeen's name on it (I also feel like some work has been done on the face).

What I like about this is it shows how Hardeen was really part of a Houdini franchise (without the financial component as Dash didn't pay a licence to Houdini, as far as we know). Franchising was not uncommon during the Golden Age of Magic. Harry Jansen became "Dante" when he was signed to head a Thurston franchise show. But those masters put their own names on the top of the bill -- "Thurston Presents..." Houdini kept the fact that Hardeen was a Houdini "franchise" a secret. Houdini's intent was to not spread his own name, but to control the market of imitators with his own. Indeed, Houdini and Hardeen were sometimes touted as rivals. However, this poster was a tell.

Did Houdini have other secret franchises? Dean Carnegie, on his blog Magic Detective, recently explored the story of Leonard Hicks aka The Great Leonard, a forgotten Houdini protege (franchisee?), who also performed the Milk Can.

Ken Silverman in Houdini!!! The Career of Ehrich Weiss

revealed that Houdini created a female escape artist named "Miss Trixy" (a name Houdini also gave to one of Hardeen's first assistants) who performed a duplicate version of his famous Water Torture Cell. Miss Trixy's real name was Wanda Timm. Houdini paid her 150 marks per month for a one-year-term, but he retained the right to cancel the contract should she be unable to perform the Torture Cell "because of loss of nerve." Again, this was a response to imitators, especially another female escape artist named Miss Undina who was doing her own, unlicensed, version of the USD.

One wonders if Miss Trixy's posters, like Hardeen's Milk Can poster, were variations on Houdini's own USD sheets. Unfortunately, no Miss Trixy posters, to my knowledge, have ever surfaced.

UPDATE: I just had a closer look at this poster and written on it is "of his famous brother Houdini." So this broadside/poster might date after Houdini's death, or the connection wasn't always so secret. (Unfortunately, there's no date on this.) One thing that's intriguing is this broadside is from the Keith's vaudeville circuit, which was the circuit Houdini played (Hardeen headlined on competitor circuits). Did Hardeen occasionally fill in for Houdini on Keith's where it was in their interest to play up the connection?
Written by John Cox at 8:44 AM