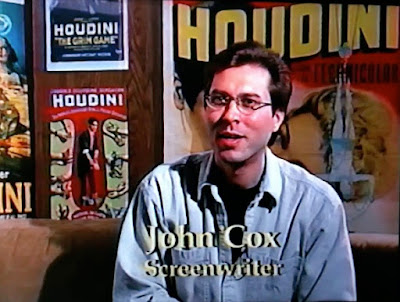 Here's a screen capture of yours truly in the 1998 Houdini documentary, Houdini Exposed, which came bundled with Houdini's silent feature Terror Island (Library of Congress print) as a Houdini VHS "Double Feature". I haven't watched it in years. But having run into the director, Kent Hagen, at The Magic Castle recently, I gave it another look. 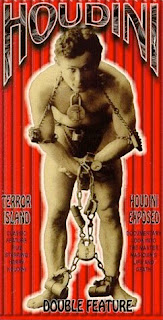 You know, it's really not a bad little doc! I'm not as awful as I remember, and I like that it spends a lot of time on Houdini's film career, which is usually overlooked and sometimes omitted from documentaries altogether. It also doesn't fall into the familiar narrative traps, such as leaping right from his mother's death to his spiritualist crusade (which were separated by 10 years). The doc also incudes an interview with Patrick Culliton, who tells some stories that have never appeared on screen or in-print before. It also features the sound footage of Bessie from Mystic Circle Murder (a.k.a. Religious Racketeers).

As far as I know, this has never made it to DVD or even onto YouTube. While the VHS can still be purchased on Amazon

, my fear is it could vanish altogether one day. Maybe I should digitize my old VHS and post it here on Wild About Harry? Or maybe I can somehow lobby for this to be released on DVD.
Written by John Cox at 9:13 AM