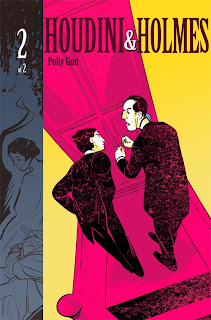 It's Comic Con weekend, so it's appropriate that we have some Houdini comic news today. The talented young artist Polly Guo tells us that she's just completed Houdini & Holmes #2, the second part of her 2 part graphic novel that teams Houdini and Sherlock Holmes.

Polly says the book is off to the printers, but cautions the turnaround time is about a month. "BUT I’m currently asking them if there’s ANYTHING I can do to help them to speed up the process," says Polly.

UPDATE: Polly tells me the publisher's turn around time is now only two weeks.
Written by John Cox at 5:24 PM