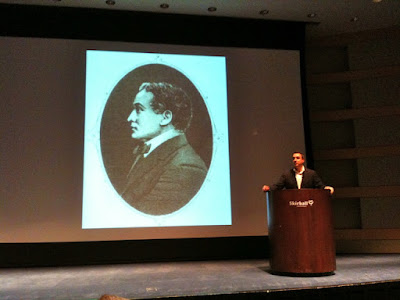 William Kalush, author of The Secret Life of Houdini

and director of the Conjuring Arts Research Center, gave a talk on "Houdini and His Enduring Fame" at the Skirball Cultural Center in Los Angeles on Sunday. The lecture was nicely tailored to general audiences, while still containing a lot of juicy tidbits for the Houdini hardcore (and there were a number of hardcore on hand, including Pat Culliton and Mike Caveney).

Bill proposed to show how Houdini's enduring fame was created by Houdini himself through a remarkably modern understanding of performance art and popular media. The public persona Houdini crafted was so strong, it still represents all that "mysterious" today. In fact, the common use of Houdini's name as an adjective actually started early in Houdini's own career, and Bill had the newspaper clippings to prove it. (Bill rejects the notion that Houdini's fame was due solely to the efforts of Bess and Ed Saint after his death, as well as the idea that magicians like Thurston were more famous in their day.)

I really can't do justice to his thesis here, but know that it was eloquent and intelligent and held the audience captive for the full hour. Bill even got a big laugh when, after describing in detail the Mirror Challenge, he said he's seen a lot of magic shows in his day, but never one that ended with the audience rushing onstage and carrying the magician aloft on their shoulders. But such was the power of a Houdini performance! 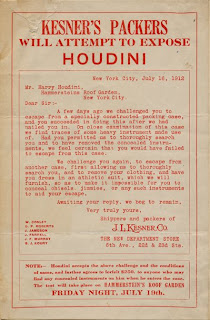 Bill used slides of Houdini challenge broadsides to show how Houdini used specific, crafty language to create a suggestion of failure or danger, while also controlling the circumstances of these very challenges. Many of these broadsides I've never seen, and I was struck by a large number that featured a challenge for Houdini to escape from his Milk Can while it was filled with milk (I always thought that was a one-off). Also amazing (and amusing) was how many featured provocative bold-type headings like "MURDER!" just to capture the public attention. Bill also pointed out how Houdini, the "arch skeptic", was happy to associate himself with the supernatural in his publicity, reading a specific article from a Master Mystery press kit that was both revelatory and pretty funny. (Another thing that made me sit up was when Bill showed a newspaper article about a bridge jump in 1898, certainly the earliest bridge jump on record.)

But it was during the very active Q&A session that Bill related a story that maybe best illustrated Houdini's enduring fame. While writing The Secret Life of Houdini, he and co-author Larry Sloman conducted a "highly unscientific" survey by sending an assistant into a park with instructions of ask people ages 18 to 24 if they had ever heard of Houdini. Not too surprising, 100% had, and they could even correctly identify him as being a magician, etc. But then they sent out the same assistant with a selection of photographs of moderately famous individuals of the time that included a photo of Houdini (and it was not an obvious photo of him in chains, just a portrait). Once again, 100% of the people could identify Houdini's photo, which Bill, and I, found pretty amazing.

A few other bits of random info I found new and interesting: Houdini would not allow Hardeen to do challenges. Bill said he thought the reason the Houdinis never adopted was because "Bess needed to be the child" in the relationship (I'm going to have something major on this topic later this week). Houdini had a method prepared to escape from a completely un-gaffed challenge Milk Can, but it's unclear if he ever did it. The box for the Double Fold Death Defying Mystery still exists and the "craftsmanship is beautiful". Bill is skeptical of the explanation that the Houdini birth date confusion has to do with the difference between the Julian and Gregorian calendars. Houdini's father was a lawyer who made a "terrible" rabbi (big laugh).

Afterwards, I was able to chat briefly with Bill as he signed my copy of his book: "For John, Keep up the amazing work! And thanks for coming to the lecture. Yours, Bill Kalush."

All in all, it was sensational Sunday afternoon of Houdini worship, and yet another terrific event hosted by the Skirball Cultural Center.
Written by John Cox at 11:06 AM