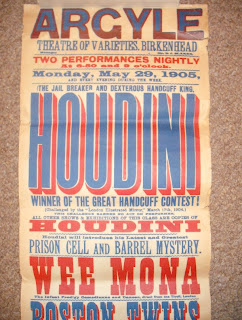 An original 1905 playbill advertising Houdini's appearance at the Argyle Theatre in Birkenhead, England, sold yesterday on eBay for $3,736.00. The auction received 70 bids.

The colorful playbill measures 34 x 11 inches and mentions Houdini's victory over the Mirror Cuff as well as his original "Prison Cell and Barrel Mystery" (why don't we know more about this effect?).

According to the seller, until this playbill was discovered, Houdini's performance in Birkenhead was unknown. Houdini had appeared the previous week in Sunderland.

The eBay winner actually got a good deal. Another example of this same playbill sold at Christies in 2009 for $7,228.

UPDATE: You can now learn more about the Prison Cell & Barrel Mystery HERE.
Written by John Cox at 7:06 AM