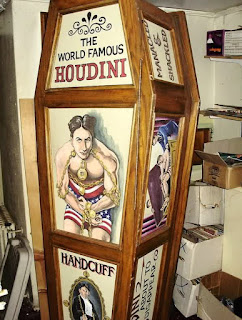 A curious custom Houdini coffin has cycled through eBay for second time without a buyer. According to the seller, this full size custom designed coffin was purchased from a warehouse that held stage props for Broadway shows. It's cushioned inside and can hold a person.

One thing that makes this coffin even more interesting is that it's somewhat of a reproduction of a real Houdini challenge escape coffin made by The National Casket Company of Boston in 1907. That coffin now resides in the great Kevin Connolly collection (Houdini Himself). Check out Ken Silverman's Houdini!!! The Career of Ehrich Weiss for a photo. There's also a pic of Kevin with the "ingeniously gaffed" casket in Patrick Culliton's Houdini The Key.

What I'd like to know is what Broadway show this could have been used in. Ragtime maybe?

The seller dropped the price to $999 on the second pass. We'll see if it cycles a third time.

UPDATE: It looks like this very well could be a prop from the original Broadway production of Ragtime. The mighty "melbo" has posted a link at Carnegie: Magic Detective to this article from 2002 about Ragtime show props going up for auction. Among the items mentioned is a "Houdini poster sign and coffin".
Written by John Cox at 9:24 AM