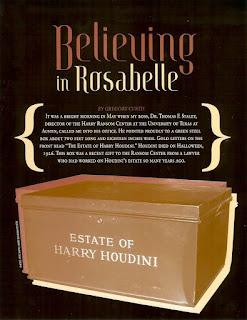 The August 2011 issue of MAGIC Magazine contains a terrific article by Gregory Curtis about his discovery of the original Houdini Code memo written by Bess Houdini and sealed in a safe deposit box. This is the note that spelled out exactly how Houdini would communicate from beyond the grave if he could -- a note that Houdini's lawyer, B.M.L. Ernst, said "only existed in Bessie's imagination." Apparently not.

The remarkable discovery was made within a new cache of estate documents recently acquired by the Harry Ranson Center at The University of Austin, Texas.

I won't spoil all of Curtis' findings here, but two things I found revelatory was the fact that Bess says the original code was conceived in 1913 (much earlier than I would have thought), and instead of Rosabelle, they had originally used "Mike", another pet name Houdini had for Bess. Great stuff!

The August issue of MAGIC (with "The Making of A Million Dollar Magic Show" on the cover) can be purchased at magic retailers and online at the MAGIC Magazine website.
Written by John Cox at 8:07 AM