It was 85 years ago on October 11, 1926, that Houdini had his only recorded accident while performing his famous Water Torture Cell. No, he didn't drown, as Hollywood has portrayed in three different films. But the accident was serious, and it can be seen as the first in a series of strange events that would ultimately lead to his death on Halloween. 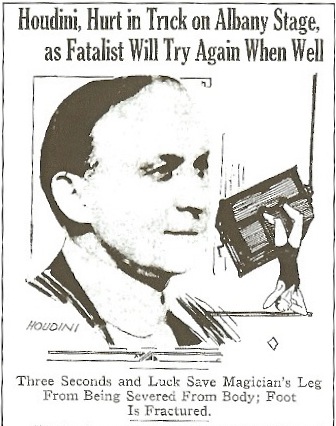 While performing at the Capitol Theater in Albany, New York, Houdini was being locked in the stocks and preparing to be hoisted upside-down over the Torture Cell. But just as he was being raised from the stage, one of the cables loosened and twisted, causing the heavy stocks to shift and fracture his ankle. He was attended onstage by Dr. Elwynn Hannock (or Brannock).

The next day the papers made much of the doctor's comment that had the cable loosened only three seconds later, Houdini's foot would have been completely severed. Houdini himself quipped, "Into all kinds of danger I have thrown myself, and I have not been touched. Then I lie on my back and fracture my foot!"

Of course, Houdini enemies saw this as an omen. One medium reportedly sent a message to Houdini's friend and fellow ghostbuster, Fulton Oursler, warning, "The waters are black for Houdini. He thinks he has only broken his ankle, but his days as a magician are over."

With his foot in a brace, Houdini would perform next in Schenectady, before moving on to Montreal...

Newspaper clipping image from Houdini The Key.
Written by John Cox at 11:17 AM