Official Houdini Seance 2011 to be held in Holyoke 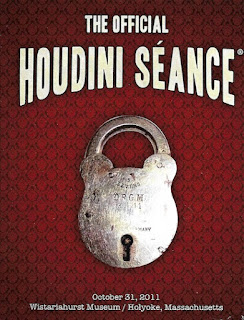 Boldt and Sid's son, Bill Radner, say they will continue the annual "copyrighted" Halloween seances -- at least until Houdini himself decides to join the gathering.

"I’ve been doing this since 1986 and never had an appearance," said Boldt. "This could be the last one if Houdini comes back."

"My biggest regret is (my father) won’t be around to see what we’re doing," Bill Radner said. "The pain is terrible, but I know at this stage this is what he would have wanted. This is not going to be a regular seance; it's going to be a level higher than it's ever been before."

This year's medium will be Kandisa Calhoun. The event will include the showing of a video of Radner explaining the two famous Houdini handcuffs that have been used at the seance for years. There also will be a surprise guest who was a close friend of Radner's and two performers doing illusions Houdini made famous.

"So it’s not only a seance, it's a tribute," Bill Radner said.

The Official Houdini Seance is not to be confused with The Original Houdini Seance, which will be held this year at the Houdini Museum in Scranton, PA.
Written by John Cox at 8:59 AM