The search for Houdini's airplane continues 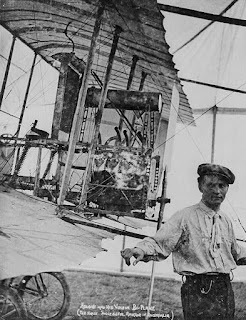 Last year as part of the Centenary celebrations of Houdini's first flight in Australia, a search was launched to find out what happened to Houdini's historic Voisin bi-plane. The investigation culminated with the tantalizing idea that Houdini's plane could have landed in the hands of Chung Ling Soo (aka William Robinson) via a fellow magician and aviation enthusiast, Donald Stevenson, who purchased the plane from Houdini in 1913.

Not long after I first posted this story on my old website, a gentlemen named Andrew Stevenson posted the following in my Comments:

"I am Donald Stevensons grandson and we know he had a plane later on on display at his aeronautical and automotive engineering works in Maidenhead. We are trying to find some photos to see if it is the same plane."


Unfortunately, Mr. Stevenson did not post a follow-up comment, so it's unknown whether he confirmed or denied that this Maidenhead plane was Houdini's Voisin.

Jon can be contacted via a special email address he has dedicated to his search: Houdiniplane@gmail.com.

I'm thrilled to hear the search for Houdini's Voisin is continuing. Let's help Jon find this sucker!
Written by John Cox at 1:13 PM