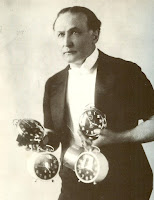 One of the faux alarm clocks used by Houdini in his Flight of Time illusion will be auctioned on Saturday, October 29, as part of Potter and Potter's "Salon de Magie" auction of magic memorabilia from the collection of Ken Klosterman.

Houdini performed the Flight of Time during his 1925-26 full evening roadshow. The effect has been called "the last illusion invented by Houdini." The Flight of Time was inherited by Hardeen who continued to perform it for many years, including during his engagement with the Olsen and Johnson show, Hellz-a-Poppin. Hardeen Jr. also performed the illusion as he carried the legacy of the Houdini-Hardeen show into the 1980s (click here for my look back at the career of Hardeen, Jr.). 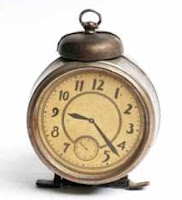 The clock in the auction has a roman numeral IV on the underside in black lettering, possibly indicating that it was the fourth clock to appear. Unfortunately, it does not match any of the clocks we see in Houdini's hands in the one publicity shot of him "performing" the Flight of Time (from Houdini His Legend and His Magic). But maybe this is because this clock is a reappearing clock, or maybe Houdini is holding real clocks in the photo for a better effect.

The auction also includes several other Houdini related items, including some nice photos of Houdini and Margery the Medium (Lot 274), a photo of Houdini and Howard Thurston (Lot 272), and a book from Houdini's library that is inscribed three times (Lot 275).

One other item that caught my eye is a scrapbook that belonged to Murray the Australian escape artist (Lot 282). As I've noted here before, I dig Murray!

Click here for more information about the auction and to download or purchase the auction catalog.
Written by John Cox at 11:55 AM