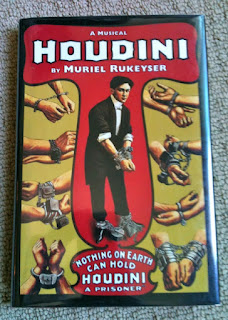 Okay, here's something that just doesn't happen anymore, so I had to share with my fellow Houdini nuts. Last Thursday when I went to the wonderful Iliad Bookshop in North Hollywood to get a protective cover for my recently arrived Houdini and Conan Doyle, I actually discovered a Houdini book on their shelf that I didn't have!

Houdini A Musical by Muriel Rukeyser is a "previously unpublished verse drama" released by Paris Press in 2002. The play contained in the book was first produced in 1973 at the Lenox Center for the Performing Arts in Lenox, Massachusetts with, get this, Christopher Walken in the role of Houdini! (Who knew?)

Ironically, on the back there is a quote from Sidney Radner (who appears to have had a hand in the publication) saying, "Everyone interested in Houdini needs this book."

Now, I doubt the existence of this book comes as any great surprise to my more hardcore fellow collectors. It is available as a paperback and hardcover on Amazon (this one is nice first edition hardcover in dust jacket). In the store I knew it was familiar and actually wasn't 100% certain that I didn't already have it until I got home. It didn't help that it uses the Europe's Eclipsing Sensation poster on the cover, which appears on several other Houdini books.

But what a joy to make an in-the-store-on-the-shelf discovery in this online age. I really didn't think that was possible anymore. :)