Houdini and the Necronauts return 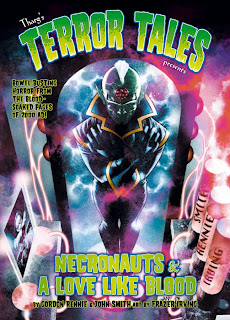 Set on Halloween Eve in 1926, the story finds Houdini, Doyle, Lovecraft, and Fort pinned inside Houdini's New York home by demons inadvertently summoned by Houdini's experiments exploring the boundaries between life and death. As Fort and Doyle battle the creatures in the halls of 278, Lovecraft and Houdini venture into the netherworld to try and defeat the awakened "Sleepers."

Considering the time frame, it's not really a spoiler to reveal that Houdini dies in this story. This makes it unique among printed Houdini fiction in that it suggests an alternate version of his demise (which, of course, must be covered up). It's all good stuff. Hardeen even puts in an appearance, although for some reason he's bald and sports a handlebar mustache.

Unfortunately, the Houdini story doesn't feature on the cover, which makes me debate whether I need to add this to my collection as I have the original. But this is a great opportunity for those who missed the original (which is now rare and expensive) to read this story. And you can see a bit of original Necronauts cover art on the lower left.


The new Necronauts can be purchased on Amazon.
Written by John Cox at 8:19 AM