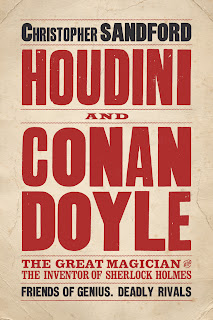 Full confession. In my 35 years of obsessive Houdini research, I’ve always found his anti-spiritualism crusade to be the least interesting aspect of his life and career. In fact, I’ve sometimes felt I’ve had to slog though these sections in biographies. But all this has changed with the new book Houdini and Conan Doyle by Christopher Sandford, which had me riveted, and is one of those rare books that I came away from feeling like I know Houdini better.

Houdini and Conan Doyle (which will be titled Masters of Mystery: The Strange Friendship of Arthur Conan Doyle and Harry Houdini when it is released in the U.S. next month) is the third major non-fiction book written about the curious relationship between these two famous men. The other books are Ernst and Carrington’s Houdini and Conan Doyle: The Story of a Strange Friendship (1932) and Massimo Polidoro’s Final Séance: The Strange Friendship Between Houdini and Conan Doyle (2001). While full props must go out to these first two books, especially Polidoro’s scholarly work, I do feel like Sandford has synthesized all previous research with his own new findings and formidable skills as a biographer to create the best book yet written on the subject of Houdini and spiritualism, and maybe the most skillfully written book about Houdini in general since Silverman (Houdini!!! The Career of Ehrich Weiss).

Houdini haters will be upset to learn that Houdini actually comes off as quite scholarly and rational in this book. For all of Houdini's efforts to portray himself as a man of letters, it really wasn’t until this book that I finally saw that man clearly. Houdini was a man of action (and reaction) to be sure, but Sandford shows he put more thought into these actions then he is generally given credit for. In other words, he really was a smart as he said he was! This is because Sandford has gained access to some key Houdini diaries (as well as some "unpublished writings" of Bernard Ernst, Houdini lawyer and close friend) that offer a counterpoint to what was going on between the two men in their letters and in public. There was what Houdini said to the papers; there was what he said to Doyle in letters; and then there are his own beliefs and private feelings that are sometimes very different.

While there are no Charmian London level bombshells in Houdini and Conan Doyle, there are a several things that I found revelatory (my apologies if these are in Polidoro – I hoped to re-read that book before I wrote this review, but that didn’t happen). My jaw hit the floor as early as page 3 when Sandford says Houdini, at age 11, attended a "series of séances" in a failed attempt to contact his dead half-brother Hermann. Also, at age 18, Houdini sold his watch to pay for a "professional psychic reunion" with his recently deceased father. Forget the death of Mama in 1913, certainly the seeds of Houdini's hostility toward mediums can be at last partially attributed to these early disappointments in his youth. 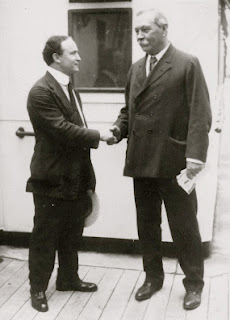 I was also fascinated to learn that Houdini purchased Doyle's father's art portfolio in auction, and that Bessie returned this treasure to Doyle after Houdini’s death; that J. Gordon Whitehead was born on the same day Houdini performed his first ever public handcuff escape (Nov. 25, 1895); that Houdini prided himself on having a substantial collection of Sherlock Holmes memorabilia, and struggled to prove that Doyle lifted his Holmes material from the writings of Edger Allen Poe. (Houdini seems eager to unleash this evidence on the world, he even teases it in his spiritualist lectures. But despite spending "long hours in his library comparing the two texts", he doesn't seem to be able to prove the theory to himself and never publishes.) And then there's the suggestion from Will Goldston that Houdini occasionally "partook in a nip of opium"(!).

(Also, on a fun personal note, I had no idea that Dr. Daniel Comstock, inventor and founder of Technicolor – my current employer – was on the Scientific American committee with Houdini.)

The narrative of Houdini and Conan Doyle is pretty evenly split between the two men, relating their respective biographies in equal measures (maybe a little more weighted to Doyle in the first third). Of course, I came for Houdini, but I found the Doyle material just as fascinating, and sometimes downright shocking! I had no idea just how far off the rails Doyle went near the end of his life, firmly believing his prophetic spirit guide, Pheneas, that the end of the world was imminent and preaching preparedness to his followers. One thing Sandford never really addresses is why Lady Doyle, as the voice of Pheneas, perpetuated this fiction for her husband. (At times Pheneas would implore Doyle to buy new home furnishings or kitchen appliances.) Unless they were both just flat out bonkers. It really is a strange, strange story.

My only complaint might be that the collection of photos included in the book leaves something to be desired. There is not even a single photo of Houdini and Doyle together (at least not in the UK proof edition, which is what I'm writing this review from -- maybe the final book will have more photos*). But photos are not what's important to us Houdini nuts and historians. It's the text that matters, and this is where Houdini and Conan Doyle by Christopher Sandford delivers!


*UPDATE: Having now received my copy of the finished book, I'm happy to report that it does indeed contain more photos than what was in the proof, including a photo of Houdini and Doyle together.
Written by John Cox at 1:21 PM