85 years ago: Houdini in Montreal 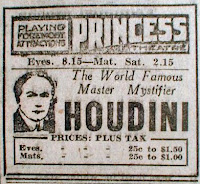 It was 85 years ago today that Harry Houdini was playing at the Princess Theater in Montreal, Canada. He had lectured a few days before at McGill University, where he reportedly boasted about his ability to withstand blows to his stomach.

Houdini invited two students, Sam Smilovitz (aka Smiley), and Jacques Price, to visit him backstage at the Princess. Houdini was still nursing a broken ankle, caused by an accident in the Water Torture Cell earlier in the month. He reclined on his dressing room couch and read his mail while Smiley, an art student, sketched him. (Smiley would later do a sketch of the dressing room scene itself.)

Soon a third student joined the party, J. Gordon Whitehead. He returned some books to Houdini and started to pepper the magician with questions. He then asked if it was true that Houdini could withstand blows to his abdomen without injury. Houdini said that it was.

Whitehead rose up and started hitting Houdini in the stomach. He delivered several blows before Houdini waved him off saying, "That will do."

After the bizarre incident, Smiley finished his sketch, which Houdini signed and dated for him. Looking at the image, Houdini is reported to have said, "You made me look a little tired in this picture. The truth is, I don't feel so well."