Machpelah before the exedra

How's that for a headline only a Houdini nut would understand? Check out this photo, which has just popped up on eBay, of the Houdinis at Mama's grave in Machpelah Cemetery in Queens, New York. 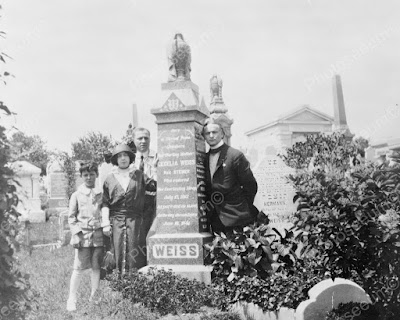 There are several things I really like about it. First, I don't recall ever seeing it before. I have seen photos of Harry and Bess taken at this same time, but here we see Dash (Theo. Hardeen) and a little boy whom I presume is one of Dash's sons. I also like that we can clearly see Houdini half-brother Hermann's original grave stone behind them, clear enough to read.

Of course, all this would change in 1916 when Houdini dedicated the full Weiss family plot. Mama's original headstone (and presumably the original headstone of Mayer Samuel) would be incorporated into the large exedra. By the way, when Houdini moved his brother and father to the plot, he had their caskets opened. Houdini noted that "Herman's teeth were in splendid condition."

Check out my own little "five-cent tour" of the Houdini family plot in 2005. The Houdini grave bust was recently restored thanks to the efforts of Dorothy Dietrich, Dick Brookz and Steve Moore of The Houdini Museum in Scranton, PA.