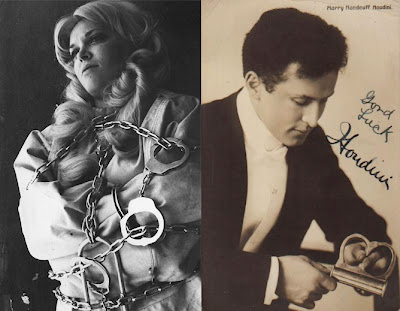 Dorothy Dietrich, escape artist and director of the Houdini Museum in Scranton, will discuss the mystery behind Houdini's famous Mirror handcuff escape on the Travel Channel's Mysteries At The Museum tonight at 9pm. The show will repeat tomorrow at 12pm, and also on Saturday, October 29, at 4pm.

Says Dorothy, "Not sure what will come out, as they filmed for over 7 hours straight. It was one of the most difficult TV sessions I have done. Because of the style of the show most of the time I was in complete darkness."

"Houdini is one of my idols and saved my life. I hope I did him proud," says Dorothy. "It was more difficult than when I escaped from a straight jacket suspended from burning rope from the top of a parachute ride for the HBO Special called The World's Greatest Escapes."

For more on the show, head on over to this page at the Houdini Museum website.
Written by John Cox at 7:44 AM