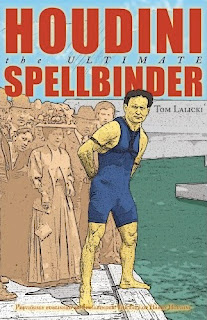 Tom Lalicki's 2000 book Spellbinder: The Life of Harry Houdini has been re-released under the new title, Houdini: The Ultimate Spellbinder.

The book sports nice new cover art (by my count this is now the fourth recent book to use this same image of Houdini performing his 1908 Harvard Bridge jump on its cover) and runs 88 pages. It' nicely illustrated with photos and is a good, concise biography for younger readers.

Houdini: The Ultimate Spellbinder is available as a paperback and as an Kindle eBook via Amazon.com and Amazon.co.uk.

Tom Lalicki is also the author of the enjoyable Houdini & Nate series.
Written by John Cox at 7:44 AM