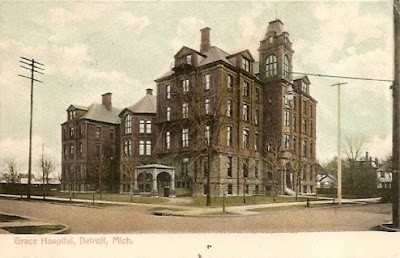 The news out of Grace Hospital 85 years ago today was not all bad. Only two days before the world had learned how Harry Houdini had been stricken after a performance at the Garrick Theatre in Detroit, Michigan. After an emergency appendectomy, the great magician was given little chance of survival by his team of four doctors, lead by the chief of surgery Dr. Charles S. Kennedy.

However, as the days wore on, Houdini appeared to rally, and showed signs of actually fighting off the infection. An experimental serum (the nature of which has never been revealed and causes controversy to this day) was administered in the hopes of helping Houdini in his struggle. It did lower his temperature to near normal. Dr. Kennedy attributed Houdini's improvement to his strong "mental attitude", and noted that no attendant mopped his brow or gave him a sip of water without him looking up, smiling, and thanking them.

Houdini's brothers, Hardeen, Nathan, and sister Gladys all came to Detroit to be at his bedside (Leo was kept back for fear it would upset him). Bess, who was under care of her own physician at the Statler Hotel ("as a result of strain caused by the magician's illness"), received a hopeful telegram from magician Howard Thurston:

"Read Houdini is not worse. His splendid physique, free of alcohol and nicotine, with his natural fighting power, will be great aids to the physicians in his recovery. Sympathy from Mrs. Thurston and myself. - Howard Thurston."


Could Houdini escape from the clutches of death itself?
Written by John Cox at 7:27 AM