Magician and Master Locksmith Mick Hanzlik, author of Looking Into The Mirror, has teamed with Jon Becker in the continued search for Houdini's Voisin biplane, and today Mick sends over something pretty exciting!

No, he didn't find the plane, but he did find photographes of the man who bought the plane from Houdini in 1913, Donald Stevenson.

Until now, there were no known photos of Stevenson, a magician and engineer who worked alongside Chung Ling Soo building model planes in the great magician's workshop. In the color photo below you can see one of those model planes.

In 1913 Houdini offered Stevenson his historic Voisin if Stevenson would pay off the storage fees. The letter Houdini wrote allowing Stevenson to claim the plane can see seen in Milbourne Christopher's Houdini A Pictorial Life (page 73). Where the Voisin went after that...well, that's the next mystery.

Thank you Mick for sharing these terrific images! 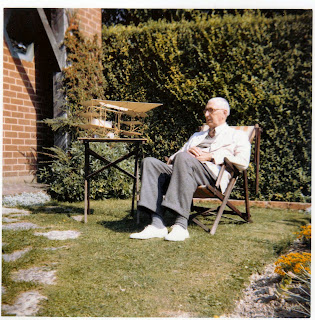