BREAKING: FIRE AT THE MAGIC CASTLE!

Joe Fox just sent me this alarming news from KABC:

HOLLYWOOD (KABC) -- A fire burned part of the attic at Hollywood's Magic Castle restaurant Monday afternoon. L.A. city firefighters responded to a report of a fire in the attic at the Magic Castle, located on the 7000 block of West Franklin Blvd. in Hollywood, after 12 p.m. Monday. The department reported a search and rescue under way. The department reported fire had reached wall space in the structure. 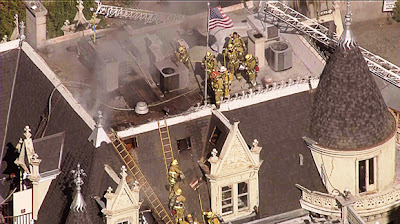 UPDATE: The L.A. Times reports that the fire is out and the damage is being assessed. The report says "the blaze was contained largely to the attic and walls of the historic venue but that there might be significant water damage."

Still, I can't help but comment on the fact that this happened on the very day and during the exact hour that Houdini died 85 years ago. Also, this was Inferno Week at the Castle.