Alpha releases Haldane of the Secret Service on DVD 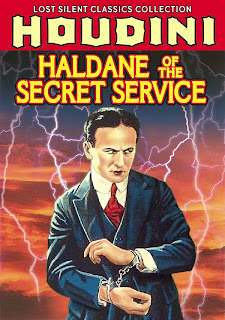 Alpha Video has released Houdini's 1923 silent feature Haldane of the Secret Service on DVD. This marks the first time Haldane has ever been released as a stand-alone DVD.

This was the last film Houdini ever made, and the second for his own Houdini Pictures Corporation. After long being considered a lost film, a fresh print was discovered (here?) and released on the Houdini The Movie Star DVD box set in 2008.

Alpha has also released The Man From Beyond, Terror Island, and Mystic Circle Murder as stand alone DVDs. While these tend to be nothing special as far as the print is concerned, Alpha goes the extra mile with cover art and menus. Cover art for Haldane is a combination of a poster for The Grim Game and typeface from Houdini's Europe's Eclipsing Sensation poster.

You can purchase Alpha Video's new Haldane of the Secret Service DVD from Amazon.com or Oldies.com.
Written by John Cox at 6:30 PM

Email ThisBlogThis!Share to TwitterShare to FacebookShare to Pinterest
Tags: DVD, Haldane of the Secret Service (1923), Movies