A copy of the 1925 book "Margery" The Medium twice signed by Houdini sold for $3,900 in a Martinka auction on Sunday. What makes this copy especially attractive is that Houdini has written across the title page, "The author of this book is a liar." 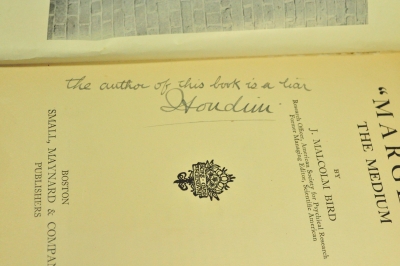 The author, J. Malcolm Bird, was the chairman of the Scientific American committee that investigated Margery. He was very close to the Crandons -- staying in their home during the investigation -- and acted as Margery informant during the seances. Committee member Dr. Walter Franklin Prince famously said of Bird, "If he wishes to achieve the authority in psychical research which I invoke for him, must hereafter avoid falling in love with the medium."

The auction noted the condition of the book as "very good with a split to the front endpaper which occurred at the annual Houdini Seance." Included was a letter explaining the chain of ownership and photos of the book being examined Anna Thurlow, the great granddaughter of Margery (who graciously gave us an interview here).

Among the other Houdini items sold in the auction were an original portrait shot of Houdini and Bess ($598), a signed photo of Houdini in hat ($1,609), and a signed portrait of Houdini smiling ($1,647).

A magic wand said to have belonged to Hardeen received 11 bids and reached $971, but did not meet the auction's reserve. 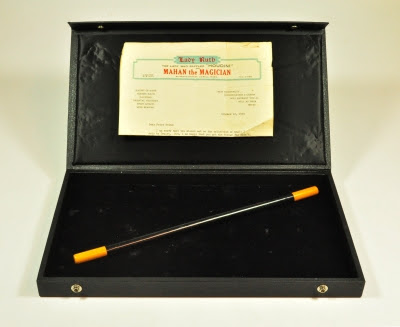 Thanks to Joseph Holland and Norman Bigelow for the tips.
Written by John Cox at 5:47 AM