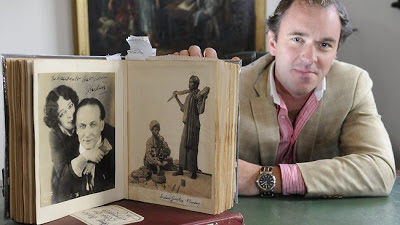 The recent sale of Houdini and magic memorabilia discovered in a garage near Sydney has made news in Australia. The success of the sale seems to have taken auction house Lawsons by surprise. The auctioneers had listed the items with very low estimates.

Managing director Martin Farrah says he was shown the items on a routine valuation of art prints. "The whole collection was an afterthought," he said. "We didn't know if there would be demand for it. But more than 70 per cent of the items were sold overseas to major collectors, individuals of celebrity status and major museums."

Lawsons won't reveal who bought the lots, but The Telegraph reports that there were eight phone bidders, "including the three Americans with apparently unlimited budgets." Speculation is that David Copperfield might have been among the buyers. Our friend David Haversat was also named by The Telegraph as a bidder.

According to The Age, "Lawsons perhaps underestimated the power of an influential network of collectors and investors in magic memorabilia. These people are happy to pay large amounts for anything relating to Houdini."