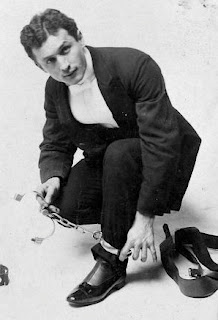 In our last installment, Houdini expressed admiration for Bavarian beer drinkers and shock at the availability of indecent postcards; "after I had purchased all I wanted--that is."

Now we find Houdini still in the capitol city of the German state during a very festive season. It's October 6, 1902, and in an column headlined "Houdini's Entertaining Chat" he writes:

München at the present time is enjoying what is known here as the Octoberfest, and is something on the order of our American Fair Grounds Exhibits. Thousands of small theaters have been built, and also thousands of beer-drinking booths, and therefore the Münchener public is happy. Everything imaginable is on exhibition. Among the freaks I recognize many Americans. Barnum's Aztecs are here. They are now gray-haired and wear whiskers (all except the lady folks), and one of them almost has a beard. The Living Skeleton is married daily to the fat lady for the benefit of the public and incidentaily [sic] the admission fees. The strong man makes love to the tattooed beauty; the magician sells tickets at the door and manages to mix people up with his short change methods, and so it goes. It reminded me of the time when I was traveling with the Welsh Brothers' Circus through Pennsylvania and had to be a freak myself. I was put in a small den and called "Projea, the Wild Man of Mexico." I remember once when Clint Newton threw me some raw meat to eat, he hit me in the eye, and I would not look at him for three weeks, as my eyes were closed. That caused me to become tame, and some one else had to play the wild man of Mexico.


Houdini playing the "Wild Man" has become part of his lore, mainly because it was so memorably portrayed in the 1953 movie Houdini with Tony Curtis and Janet Leigh. In the film Harry is playing the wild man in a dime museum and this is where he first sees and courts Bess...with disastrous results. "You can have tears in your eyes for the Wild Man; but for The Great Houdini, nothing."

The wild man story was told at length in the first major Houdini biography, Houdini His Life Story by Harold Kellock, and has appeared in many subsequent Houdini biographies. But it wasn't until Ken Silverman's seminal 1996 study, Houdini!!! The Career of Ehrich Weiss, that the full name, "Projea, the Wild Man of Mexico," was ever revealed. Silverman doesn't give his source, but it's likely it was this very column. By the way, the meat thrower, Clint Newton, was the ringmaster of the Welsh Bros. Circus. (Read more about Houdini's tours with the circus here.)

It's fun to see the famous Houdini recalling his days as a sideshow circus freak. And remember; "it was women who made the wild man wild."


Coming next: Breaking into Russia.
Written by John Cox at 8:33 AM