Maurine Christopher passes away at 92 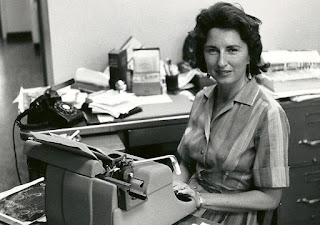 Sad news today. David Haversat has announced that Maurine Christopher, wife of the late Milbourne Christopher, died at her home in New York yesterday. She was 92. David writes:

As agent, publisher and friend of Maurine Christopher, it is with deep sorrow that I announce her passing.

Maurine Christopher of New York City died at home surrounded by her friends on February 28, 2013. She was 92 and the beloved wife of the late master magician, author, collector and performer, Milbourne Christopher.

Mrs. Christopher had a distinguished career in journalism as a reporter for the Kingsport Times before becoming a reporter for the Baltimore Sun newspaper from 1943 to 1945. She was the daughter of John Davis Brooks and Zula Pangle Brooks of Russellville, Tennessee. She was a graduate of Tusculuim College in Greenville, earning an A.B. degree in English and political science and held an honorary Doctor of Letters from St. John's University in New York. She married the distinguished Milbourne Christopher on June 25, 1949. Her many articles appeared in consumer magazines in the U.S. and abroad. In N.Y. she gained prominence as Deputy Executive Radio-TV Editor of Advertising Age. Mrs. Christopher was instrumental in coordinating national newspaper marketing and produced the weekly syndicated radio program called "Adbet" and "Stars of Advertising." In 1971 she became nationally known for her book America's Black Congressmen, published by Thomas Y. Crowell Co., New York.

Following her husband's death in 1984, she continued his avid interest in his vast collection of magic memorabilia and established the "Milbourne Christopher Foundation" sponsoring awards for exceptional people in the art of magic. She wrote articles for magic magazines, appeared at magic conventions, arranged auctions of her husband's enormous collection and republished many of her husband's magic history books.

Arrangements are private. In lieu of flowers it is asked that donations be made to The Milbourne Christopher Foundation.

Maurine will be greatly missed.