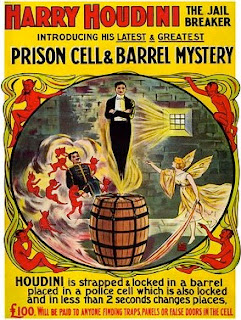 Another week, another major Hollywood movie about a magician. The Incredible Burt Wonderstone, which opens today, contains fewer nods to Houdini than did last week's OZ The Great and Powerful, but the Master Mystifier still puts in an appearance.

While Houdini doesn't get a proper name-check in this film, you can spot his famous "Prison Cell & Barrel Mystery" poster on the wall of the apartment belonging to assistant and aspiring magician, Jane, played by Olivia Wilde. In fact, it looks like Houdini might be the only male magician to make it onto Jane's wall of fame. My kind of gal.

But the real Houdini connection might lie deeper within this film. Actor Jim Carrey, who steals the movie as Steve Gray, "Brain Rapist", is a self-confessed Houdini admirer. In a May 1998 Q&A with Movieline magazine Carrey was asked if he could dine with any group of people from history, who would they be?

I was able to catch an advance screening of The Incredible Burt Wonderstone for Magic Castle members last week in Hollywood. I enjoyed it!