AND THE WINNERS ARE...

Here are the five winners of a free U.S. paperback edition of Masters of Mystery: The Strange Friendship of Arthur Conan Doyle and Harry Houdini by Christopher Sandford, courtesy of publisher Palgrave Macmillan and WILD ABOUT HARRY.

Congratulations to the winners! Your names and addresses have been forwarded to the publisher who will send out your books. Thanks to everyone (35 total) who entered the drawing.

Now, here are the answers to our entry questions: 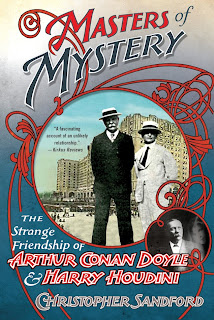 Masters of Mystery: The Strange Friendship of Arthur Conan Doyle and Harry Houdini can be purchased at Amazon.com. You can read my review HERE.
Written by John Cox at 9:34 AM