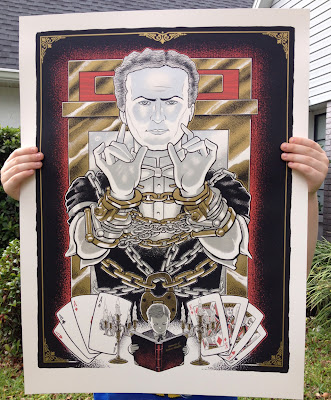 Artist Rob Schwager has created this gorgeous 18″ x 24″ poster print of Houdini in celebration of the Master Mystifier's 139th birthday on Sunday. Rob tells the story of how he became fascinated with Houdini on his website, Tiny Bird Press:

I first learned about Harry Houdini when I was a little kid, one lazy Sunday afternoon while watching the 1953 film starring Tony Curtis and Janet Leigh, on TV.

In that movie, there’s mention of a great magician, named Von Schwager.

Naturally, I had to find out more about this magician who shared a similar surname with me.

I poured over whatever Houdini books that I could get at the library to find out about this mysterious “Von Schwager” person. Turns out, he was just a character made up for the movie. However, in doing all this reading, I came to learn a great deal about the incredible man known as Houdini. I became obsessed. I learned of his meager upbringing. His drive to excel at whatever he did. His incredible work ethic. How reading a book about magician Robert-Houdin, at an early age changed his life and set him on the path that would eventually make “Houdini” a household name. He was the catalyst for my life-long love of the art of magic.

In celebration of Harry Houdini’s 139th birthday, (March 24th) I’m releasing this print, as a small tribute to him. The man who had made a giant impact on my life and inspired my imagination. 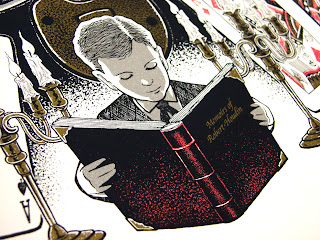 Rob's beautiful Houdini Tribute print can be purchased for $40 at the Tiny Bird Press webstore.

UPDATE: I've received my print from Rob and I can assure you it's spectacular! It's printed like a lithograph on very heavy high quality paper. It will frame up beautifully.
Written by John Cox at 10:22 AM