On April 6, 2013, Potter & Potter will hold a remarkable auction of Cardini memorabilia. Apart from Houdini, I don't think I've ever seen an auction of so much material from a single magician.

In the auction are a several items of Houdiniana, but one that really stands out for me is this Challenge handbill for a Milk Can escape in Hackney, England (Lot 286). According to the auction listing, this was found among personal papers kept by Houdini and later Bess. 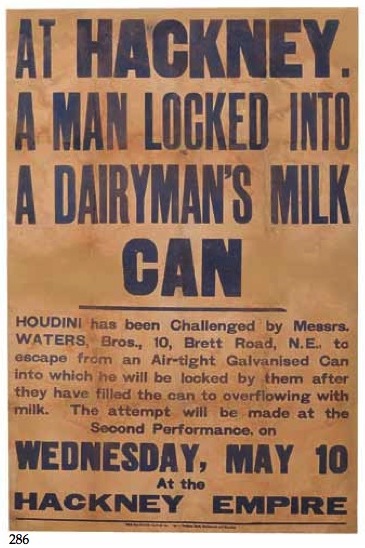 Not only is this a handbill I've never seen before, but the auction dates it as 1905. Now, I know that Houdini did the Milk Can as a challenge before he introduced it as his "original creation"...but 1905? That a full three years before the Milk Can was officially introduced and easily the earliest mention of this escape that I can recall.

It's possible this is simply misdated. Derek Tait, an expert on Houdini in Britain and author of Houdini The British Tours, can't place Houdini in Hackey at this time. Derek notes that May 10 fell on a Wednesday in 1905, 1911, and 1916. Derek believes this could be 1911 when Houdini was appearing at the Empire Finsbury Park close to Hackney. That would also make sense as the Milk Can was a feature of his act at this time.

However, why would this particular challenge be kept among Houdini's personal papers? It's not an especially attractive sheet, so I expect it's because it held some significance. If this is from 1905, might this be the first time Houdini performed the Milk Can? Or, even more tantalizing, could it be this was a genuine challenge to escape from an oversized Milk Can (if such a thing really existed) and it's where Houdini got the original idea for his own Milk Can escape?

You can download or purchase the catalog for "Cardini - The Suave Deceiver" at the Potter & Potter website.

Thanks to Joseph Holland and Derek Tait.

UPDATE: Gabe Fajuri of Potter & Potter comments that the auction lot has been updated to show that the broadside was printed in 1911.
Written by John Cox at 6:48 PM