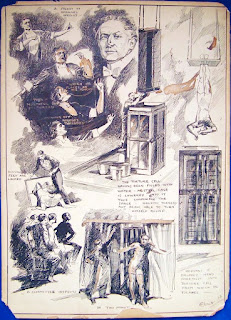 David Haversat is selling the original pen and ink illustration of Houdini's Water Torture Cell and East Indian Needle Trick. According to David, this was commissioned by Houdini and was discovered and acquired from the portfolio of artist, Elclock. A photocell of this was offered at the Manny Weltman auction in October of 2002. However, this is the actual signed drawing. It's dated 1913 and measures 10.5" x 14.5".

Houdini used this illustration in advertisements, pitchbooks, and in newspapers across the country. It has been reproduced in many subsequent Houdini books, but this is the first time I've ever seen the now 100-year-old original. Very cool.

David is offering this at a "firm" $5,695. You can contact him via his website, David Haversat Magic. I'd also recommend signing up for David's email list because this is where he makes magic rarities, such as this drawing, available.