Another day, another unseen Houdini photo

I've said this many times, but it blows my mind how after 35+ years of obsessive Houdini collecting and research I continue to see new photos of him almost every month. How many photos of this man exist!? Last month we saw an unpublished photo of Houdini in the Lawsons auction. Now just seven days into March we have another. 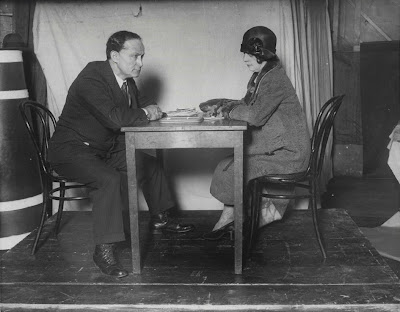 This shot is from a large collection of press photos currently on eBay. It shows Houdini and Bess seated across a seance table. I've seen other pics from this same session in which Houdini demonstrates methods used by fraudulent spiritualists, but never this particular one. Bess is writing on a note pad and Houdini is looking intently contemplative. Perhaps Bess is "automatic writing" her husband's thoughts?

Normally my policy here is to not write about eBay auctions until after they are over. But with a starting price of $688.88, this isn't exactly a bargain to let fly under the radar for some lucky buyer.

Other photos in the lot are of Herbert Hoover, Rock Hudson, Howard Hughes, Mae Clarke, Lena Horn, Ozzie & Harriet, Jesse Jackson, Arnold Palmer, and more. But it's the photo of Houdini (and Bess) they used to showcase the auction.
Written by John Cox at 12:36 PM