Houdini vs Scotland Yard; but did it really happen? 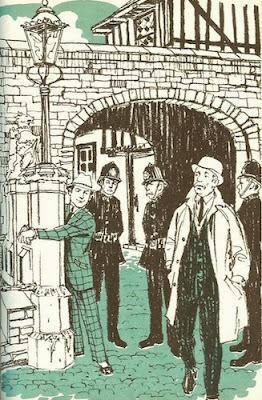 It's part of established Houdini history that on June 14, 1900, Houdini won his career-making engagement at the Alhambra Theater in London by escaping from a pair of handcuffs at the famous Scotland Yard police headquarters. Yes, it was exactly 113 years ago today that Houdini triumphed in what was up to that point his most important challenge.

The story as vividly told in several biographies goes something like this: When Houdini and Bess found themselves "shipwrecked" in England without a booking, Houdini visited the manager of the Alhambra, C. Dundas Slater, to show him his clippings from America. Slater was unimpressed. But he did say if Houdini could prove himself by escaping from handcuffs at Scotland Yard, then he would book his act.

So on June 14, Houdini, Slater, and one of Slater's assistants traveled to Scotland Yard where they met with Superintendent William Melville himself. A bemused Melville locked Houdini's wrists around a pillar and said he'd come back for the magician after he and Slater had had lunch. "This is how we treat yanks who come over and get themselves into trouble," Melville is reported to have said.

As soon as their backs were turned, Houdini answered, "Wait a minute. I'll join you." And with that the cuffs clattered to the floor and Houdini stepped forward, a free man. Houdini won his engagement at the Alhambra and the rest is showbiz history.

It's a great story. But did it really happen?

There is shockingly little evidence to support this entire tale. In fact, there are only two pieces of evidence from Houdini's lifetime that biographers use to source the entire Scotland Yard exploit. The first is Houdini's signature in Scotland Yard's Black Museum guestbook on June 14, 1900. So we know he was there. The second is a notation on a telegram in a scrapbook in the David Meyer collection. The telegram congratulates Houdini on his Alhambra debut, and at the bottom Houdini has written, possibly years later, "This is the day I visited Scotland Yard, escaped out of their cuffs."

That's it. There's no pillar, no snappy dialogue, no deal with Slater, no Superintendent Melville. In fact, as far as I can find, the full story as we've come to know it didn't exist in Houdini's lifetime (see update). So when did it come into being? The answer only throws this exploit further into doubt.

That's because the Scotland Yard challenge first appears in the Harold Kellock biography, Houdini His Life Story, a book notorious for being a collection of Houdini mythology that has scrambled fact and fiction for years. Yet the story was so good, subsequent biographers continued to tell it in books that otherwise worked to strip away the mythology of Kellock. The magic moment has even been immortalized with illustrations in several juvenile Houdini biographies.

And then there's Hollywood. A Scotland Yard jail escape (better than just handcuffs) is dramatized as the breakthrough moment for Harry in both Houdini (1953) and The Great Houdinis (1976). Almost all documentaries also highlight the Yard escape.

"There is no record of any conversation between Supt Melville and Houdini, nor is there any record of the escape from a pair of handcuffs taking place."


Ruth Brandon downplayed the incident in her 1993 biography, The Life and Many Deaths of Harry Houdini. Then Pulitzer Prize winning biographer Ken Silverman tackled Houdini's story with a fresh eye in his seminal 1996 work, Houdini!!! The Career of Ehrich Weiss. Silverman rejected all that had been written about Houdini up to that point and researched his book from scratch, rebuilding Houdini's story using only reliable primary sources. His approach was if he couldn't verify the information, it isn't in the book. The Scotland Yard handcuff escape is not in the book.

However, the Scotland Yard story comes roaring back in Kalush and Sloman's 2006 The Secret Life of Houdini with all the vivid embellishments and expanded dialogue to boot! For their account the authors source the guest book signature (okay) and Kellock (gack!). But even here the authors acknowledge that it's unlikely Houdini, two weeks off the boat, could walk into Scotland Yard and meet with a man like William Melville. Unless, of course, Houdini was a secret agent (double gack).

Now, I'm not a big fan of challenging popular Houdini stories. I'm not a mythbuster by nature. I'm even holding out hope that we'll someday find evidence for the under the ice story. Not long ago someone asked me if there was any evidence that Houdini really escaped from the Siberian Transport Prison Van in Russia? That's silly. Why question that? Sure, the Russian police wouldn't provide an official testimonial, but there is a wealth of residual evidence in the form of publicity material about the escape, including a poster.

And that's another reason why I'm so skeptical about the Scotland Yard escape. If it happened the way Kellock said it did, where is all the residual evidence in the form of publicity material? Why did Houdini not promote what at the time would have been the most spectacular escape of his career? And why no mention of this in any of his pitchbooks? All his pitchbooks say of this breakthrough period of his life is: "After several trial shows and private exhibitions for manager C. Dundas Slater, Houdini received a contract."


And what about those trial shows? There is no disputing that these took place. Houdini complained about them in letters that he wrote back to Martin Beck in America (no mention of a career-making Scotland Yard handcuff escape in these letters, by the way). So why was Houdini auditioning as late as June 27 when the matter had been settled, according to the story, at Scotland Yard on June 14? Tellingly, Kellock omits any mention of these trial shows. Of course, he would have to to make the Scotland Yard story work, just as he omits Bess's performing with The Floral Sisters to make the "acid on the dress" story work.

Now, it's possible the Scotland Yard escape didn't find its way into Houdini's promotional material because it was a private test and didn't seem newsworthy. Possible. But this would mean that Harry Houdini didn't recognize the publicity value of escaping from handcuffs at the most famous police station in all the world. And that, my friends, is impossible.

Here's what I think happened 113 years ago today.

Houdini did visit Scotland Yard. He may have met with an official there. Maybe it was Melville; more likely it was and underling. He probably did the Needles, some card tricks and, yes, escaped from a pair of Scotland Yard cuffs.

But it was not a challenge. It was a social call. Because what Houdini was doing on this day was what he had done many times in America and would do many times after. He was paying an advance visit to a police station to see if they would be agreeable to hosting a publicity stunt in which he would return with reporters and escape from restraints or even a jail cell. Houdini may have pitched the idea to the official...who may have turned him down. That was not the kind of thing that Scotland Yard would participate in.

So this confirms the visit (guest book evidence); confirms a handcuff escape (Houdini's notation); but also explains why Houdini never promoted a Scotland Yard escape and why he still had to win his engagement at the Alhambra by auditioning.

Of course, all this sounds a little too much like mundane real life, so Kellock took the nuggets of a visit to Scotland Yard on June 14 and spun it into an exciting tale in which Houdini's entire career hinged on a single handcuff escape. A great story. So great, in fact, no one ever really wanted to question it.

But this isn't without controversy. While working on this post I ran the idea that the Scotland Yard escape never happened past Houdini's Ghost himself, the great Patrick Culliton. Pat has a different take. He believes the escape happened exactly the way Kellock describes, but he believes it was a set-up. Houdini had previously convinced Melville to play the "stooge" in front of Slater and help him land his career-making engagement. Pat's simple reply: "It happened."

UPDATE: Well, it didn't take long to shake this up. Bill Mullins has posted to the Genii forums three separate newspaper interviews in which Houdini mentions a Scotland Yard escape. However, there is no mention of Superintendent Melville, a pillar, or a bet. And just to muddy the waters more, Houdini claims to have also escaped from a jail cell that day!

UPDATE: I recently found what may be the first recored newspaper account of Houdini's visit to Scotland Yard and it is very similar to what I speculated really happened that day. Read: The real story of Houdini at Scotland Yard?