Here's a photo of Houdini and Bess posing with a group of fellow travelers at "Balanced Rock" in the Garden of the Gods National Park in Colorado Springs, CO. This was most likely taken in December of 1915 as Houdini was performing in Colorado Springs at this time, and that date seems right for his appearance.* (It's likely this photo was taken during this same trip.)

By the way, notice the tall man in the back without a hat. Looks a lot like Adrien Brody, doesn't it? Spooky... 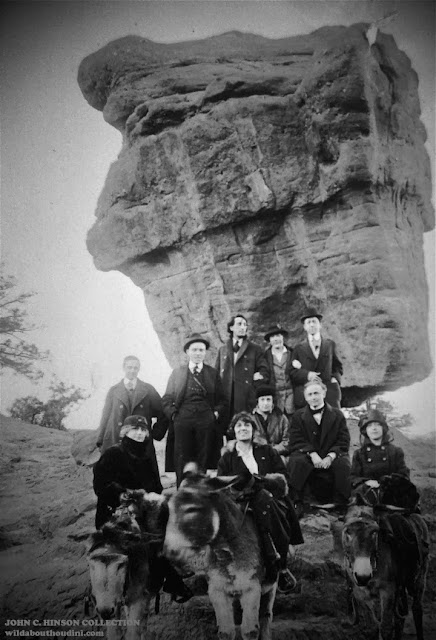 Why it is a fit place for the gods to assemble. We will call it the Garden of the Gods."


Balanced Rock in the Garden of the Gods National Park still exists today and is a popular stop and photo op for tourists. Now besides being an amazing natural phenomena, we can add: Houdini was here!

Click here to view all the installments of Unpublished Houdini.
* UPDATE: Houdini dated this visit as January 4, 1916.
Written by John Cox at 12:21 PM