Unpublished Houdini: With his baby

Here's Houdini the proud new author holding his first major book, The Unmasking of Robert-Houdin, published in 1908. His baby. In Unmasking, Houdini set out prove that the great French conjurer, Jean Eugène Robert-Houdin -- Houdini's boyhood hero from whom he took his name -- did not deserve credit for the many magic effects he was said to have invented. The celebrated "Father of Modern Magic" was, according to Houdini, in reality "the Prince of Pilfers." 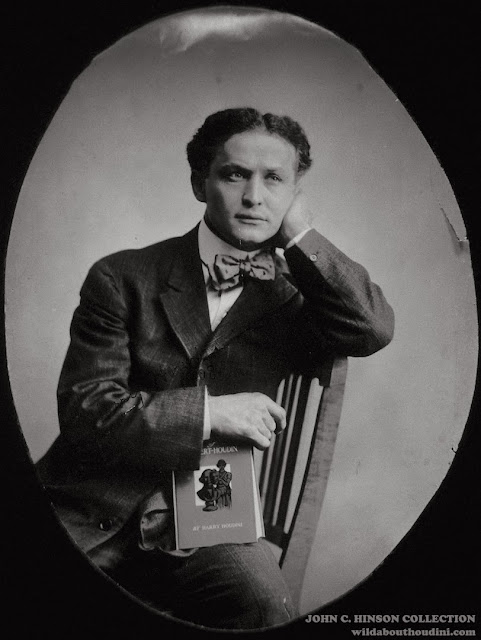 "Wrote until 2:30 AM on Houdin book. This is a labor of love. I shall be happy when it is finished, as it will take a lot of worry off my mind."


Houdini was immensely proud of his book, which features many images from his own collection, and dedicated it to his father. In adverts he even offered a cash prize of $250 if anyone could name "a book which has taken so much time, energy, travel and money, with such authentic data regarding real magical inventions." While he knew many would not read the book cover to cover, he still implored them in his inscriptions to at least "read the introduction." (This can be found written in many copies of Unmasking, including one in my own collection).


However, the magic community, especially in France, severally criticized Houdini's wholesale "attack" on Robert-Houdin, and the book still provokes a strong reaction today. Kenneth Silverman writes in Houdini!!! The Career of Ehrich Weiss: "Some magicians damn the book; others accept or reject its arguments piecemeal; none endorses it whole."

Houdini never expressed any regret for his what is now seen as an over-the-top (one chapter is titled: "Robert-Houdin's Ignorance of Magic") and somewhat Oedipal attack on his namesake. Many think the true roots of the book lie with the French magician's family snubbing the newly famous Houdini during his first tour of Europe.

The one admission Houdini would allow years later was: "The only mistake I made was in calling my book Houdin Unmasked. It ought to have been History of Magic."


Click here to view all the installments of Unpublished Houdini.
Written by John Cox at 9:18 AM