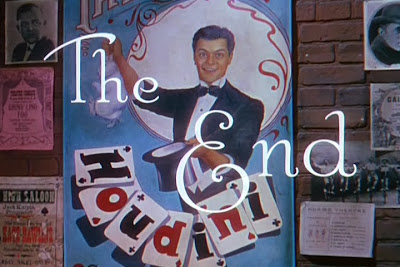 Our friend Joe Notaro at Harry Houdini Circumstantial Evidence is branching out from his focus on all things Grim Game and has now uncovered two alternate endings to the 1953 biopic Houdini with Tony Curtis. Interestingly, at one point the dressing room punch was to have been included. Joe discovered this in an early script summery by Dorothy Harrington dated 4-30-52, which he transcribed in part below:

Part 1: Is this really how it went down?

While the film was always meant to end with Houdini drowning in the "Pagoda Torture Cell," there were at least two proposed scenes with Bess following the tragedy onstage. The ending as shot accomplished much the same thing more efficiently (they always wanted to end on the image of Houdini's early magic poster), but it would have also been nice to have a beat with Bess as the lonely window in waiting. Still, maybe the movie was sad enough!

Here are the links to the two Bessie endings:


Part 2: Is this really how it went down?
Another Ending to the Tony Curtis Houdini Movie

I love this kind of stuff. Way to go, Joe!