Audible releases 'Imprisoned with the Pharaohs' 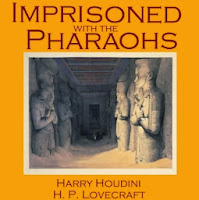 Audible.com has released a new recording of the classic Houdini short story, Imprisoned with the Pharaohs (aka Under the Pyramids), read by Cathy Dobson.

First published in the May-June-July 1924 issue of Weird Tales magazine, the story tells of Houdini's adventures trapped in a Egyptian tomb. While the story appeared under Houdini's byline and is told in the first person, it was actually ghost written for the magician by the great H.P. Lovecraft.

This new reading of Imprisoned with the Pharaohs is available on Amazon.com for $7.91, or Free with an Audible.com 30-day free trial membership.

Amazon notes this recording is: "Unsuitable for claustrophobics, people of a nervous disposition, or people with a vivid visual imagination." Nice.
Written by John Cox at 8:09 AM