Guest Blog: Silver Mirror cuffs made before the challenge? Not so fast...

Today we have a Guest Blog by Master Locksmith and Mirror Handcuff expert Mick Hanzlik regarding a new finding about the silver Mirror Presentation cuffs. 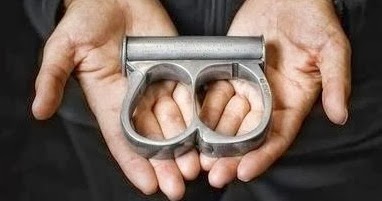 There has been a lot written about Houdini's Mirror Handcuff Challenge of 1904, but not much information has been available about the silver replica handcuffs that he was presented with by the Daily Illustrated Mirror, to commemorate his victory.

We know that he was presented with the silver cuffs about six weeks after his victory, during a performance at the Brighton Hippodrome, and we also know that the original cuffs and the replicas were kept in the family in the possession of Bess and they eventually were seen together in a glass case at the Houdini Magical Hall of Fame in Niagara Falls.

Both handcuffs are now owned by illusionist David Copperfield, and are housed in his private Museum of Magic in Las Vegas.

Recently there has been speculation as to when the replica handcuffs were made.

In the Kalush/Sloman book, The Secret Life of Houdini, it states that after analyzing the marks on the sterling silver replicas, an amazing fact surfaced. It stated that the date mark was for 1903, a year BEFORE the challenge took place, so it was evident that the Daily Mirror conspired with Houdini to create a "highly dramatic and exciting challenge"

Well, this of course is possible, but I want to give one reason why there may have been some confusion.

I have been in touch with the London Assay Office who have controlled the marks on silver for hundreds of years. I sent them a photograph of the marks and they came back with the following information:

The H&CO mark is the maker's mark, Hamilton and Company, who were based at 202 Regent Street, London.

The lion denotes that the cuffs were registered with the London Assay Office.

The leopard head denotes that the cuffs were made of Sterling silver.

BUT - it has been confirmed that the date marks did not run from January to January.

The date marks ran from May to May.

The challenge was March 17th 1904. The replica cuffs were presented to Houdini about six weeks after the challenge, so at the latest, that would be towards the end of April 1904. During those six weeks, the cuffs would have to be registered as required by the Assay Office, so that would have had to have been before May 1904, therefore the 1903 "h" mark would have been the only one that could have been used.

Of course, the silver replica cuffs COULD have been made any time between May 1903 and May 1904 and still carry the "h" date mark, so there is still uncertainty when they were actually made. The records for the makers Hamilton & Co would give the definitive answer, but the company stopped trading in late 1904, so they are probably lost forever.

My personal thoughts are these: The replica cuffs were presented to Houdini about six weeks after the challenge. Six weeks would in my opinion, be just about long enough to make the replicas, get them engraved with the inscription saying that Houdini beat the challenge, and then get them registered with the Assay Office.

As the challenge created so much publicity for the Mirror and Houdini, I think that by presenting Houdini with the silver replicas, they were able to gain even more publicity.

So I would like to think that they were made in those 6 weeks following the challenge. Maybe we will never know, but the research continues……