I hadn't expected to see anything on Simon Nicholson's first "Young Houdini" book, The Magician's Fire, until next year. But now Amazon.co.uk has posted the cover art and a plot synopsis. Gotta say, I love this cover and the Young Houdini logo. This is going to be a fun series to collect. 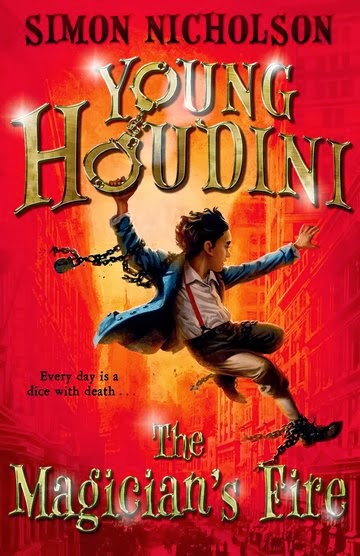 The world's most famous magician. But before his name became legend, who was young Harry Houdini? New York City, 1886. Harry Houdini is just a penniless street urchin dabbling with a few escape tricks. But when a well-known magician goes missing in mysterious circumstances, Harry and his friends, Arthur and Billie, are sucked into a deadly adventure. Now Harry must put all his extraordinary skills into action - not just to solve the mystery - but to stay alive. Because when he falls into the clutches of some of Manhattan's most dangerous villains, his spectacular escapes won't be for show - they'll be a matter of life and death!


Young Houdini: The Magician's Fire will be published in the UK by Oxford University Press in November 2014. The series is aimed at readers 9-12. There is no news yet on a U.S. publisher.