Today we have the final installment of Unpublished Houdini. In this series I shared a new never-before-published photo of Houdini every Monday from our generous Hinson Endowment.

This portrait shot of Houdini has appeared in at least one documentary, but I don't believe it has ever seen print; so I think it's a perfect way to end our Unpublished Houdini series. What can I say? This is a fantastic shot of Houdini, capturing his iconic gaze and intensity, and the background gives it a very contemporary feel. It's almost like this was put together in present day to exaggerate the mystery of Houdini. But this is Houdini's own work in his own time. It's Houdini then, now, FOREVER. 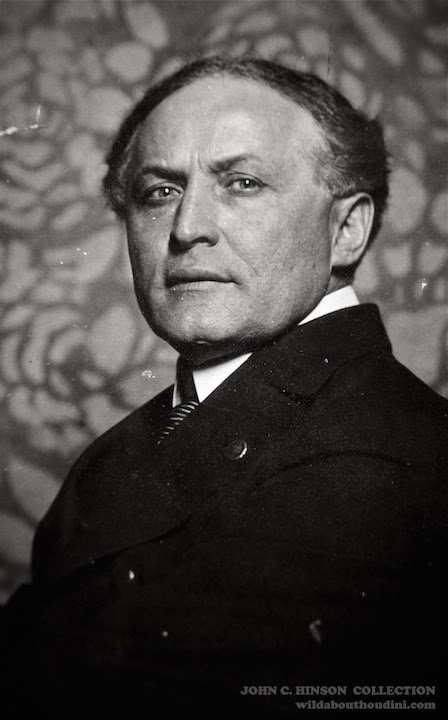 
I hope you all enjoyed our weekly dose of Unpublished Houdini. But don't worry, I still have plenty of unpublished shots of Houdini and Bess from our Hinson Endowment and I'll continue to share them in posts throughout 2014.

The Complete Unpublished Houdini:
Bound at Last
The ladder tie
Man of action
Hollywood pals
Confidence
In Los Angeles
Bess at home
Harry at work
Tourists
With his baby
From Beyond
Among Gods
FOREVER
Written by John Cox at 10:05 AM