Is Houdini headed back under the ice? 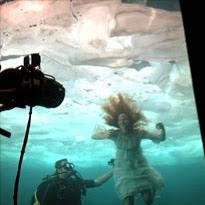 Hungarian actress Eszter Ónodi, who plays Cecilia Weiss in HISTORY's Houdini miniseries, has shared an intriguing behind the scenes photo on her Facebook page. It shows the actress under a sheet of ice in a nightgown. A ghostly vision of Mama guiding Harry to the surface maybe?

This should sound familiar. In the classic 1953 Houdini biopic starring Tony Curtis, Houdini finds himself trapped under an ice sheet during an underwater escape and follows the sound of his mother's voice to the exit. It one of the most memorable and harrowing moments in the film.

So does this mean the Houdini miniseries will feature the trapped under the ice story as well? If so, it might raise some heckles among magic buffs. Even though Houdini himself told this tale, it generally accepted to be pure fiction, and even Hollywood has resisted this bit of mythology since the Curtis film.

But there is another possibility. This is just my own speculation (I've not read the script and I've not discussed this with anyone involved in the production), but this could be a dream sequence. This would be a very clever way to have this famous Houdini episode in the film without perpetuating the myth that it actually happened. Having it happen only in Houdini's imagination…that works pretty well!

So is this a dream or "reality"? I guess we'll find out next year.

Houdini stars Adrien Brody as Houdini and Kristen Connolly as Bess. The 4-hour miniseries is directed by Uli Edel from a script by Nicholas Meyer. Houdini is an A&E Studios Lionsgate co-production. It will air over the course of two nights on HISTORY in 2014.


Click here to view all the news on the Houdini miniseries.
Written by John Cox at 4:14 PM