Another World by Rob Zabrecky 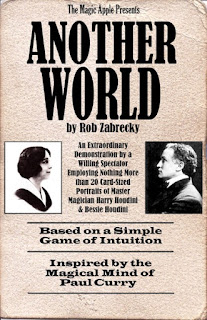 It's not often I share news of a commercial magic trick, but when that trick comes from the great Rob Zabrecky and involves Houdini, it deserves attention!

Another World is a trick using 20 pocket sized photographs of Harry and Bess Houdini. I've seen Rob do this at The Magic Castle and it's terrific. Here's a description:


"Another World" is being released today at the Magic Live convention in Las Vegas. This is Rob's first commercial release. You can purchase it online at The Magic Apple.
Written by John Cox at 8:21 AM