The new Houdini Bust was unveiled today in Houdini Plaza in Appleton, Wisconsin. You can view the magic moment for yourself via the City of Appleton's Twitter:

And here it is! The new #Houdini bust in #HoudiniPlaza #Appleton pic.twitter.com/b8frIIK1wt
— City of Appleton (@cityofappleton) August 27, 2015

The Houdini Bust was created by Sculpture Valley and artist Craig Campbell. Campbell incorporated several keys and lock-picks from Houdini's famous trunk No. 8 (housed in Appleton's Museum at the Castle) into the sculpture. There is also a hidden key that pulls out from behind Houdini's ear.

In other happenings, The Houdini Club of Wisconsin is holding their 77th annual convention in Appleton this week. The club will present two public magic shows on Friday and Saturday at UWFox's Perry Hall. A special tribute to Houdini is scheduled for Saturday's show. 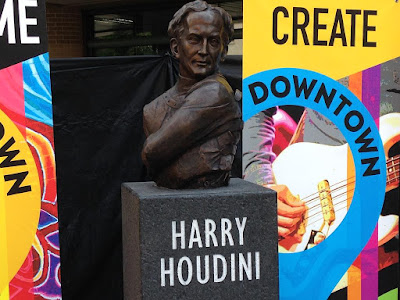