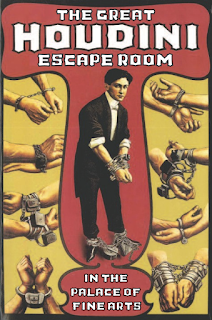 A Houdini-themed "escape room" attraction has opened in San Fransicso's Palace of Fine Arts. I'm not entirely sure what these "escape rooms" are all about, but they appear to be shared funhouse-type experience that challenges a group of people to puzzle their way out of a locked room. Below is an explanation of The Great Houdini Escape Room and a video with the room designer.

The Great Houdini Escape Room is the world’s first “escape room” — built 100 years ago by the escape master himself, Harry Houdini, as a challenge to 8 brilliant innovators, to see if they could escape his contraption filled room within 80 minutes.* These innovators — Thomas Edison, Alexander Graham Bell, Henry Ford, Charlie Chaplin, John Philip Sousa, William “Buffalo Bill” Cody, Helen Keller, and Luther Burbank — all participated in the Panama-Pacific International Exposition of 1915 in San Francisco. The room is now open to the general public, available by reservation only.

* This first line may not be exactly true — but let’s pretend it is! The rest IS true.


A visit to to "The Great Houdini Escape Room" is included in one of the Kickstarter premiums for The Official Houdini Seance 2015, which is being held in San Fransicico this year.

To make reservations and to get more information, visit http://houdini-escape.com.