Back in May, I attended the Midwest Magic History Weekend in Marshall, Michigan. That trip gave me an opportunity to visit some famous Houdini locations in Detroit. I highlighted those at the end of my full report on the weekend, but I thought I'd expand it here with more pics and maps to provide a better reference for Houdini's Detroit today. These photos were all taken on May 31, 2015.

My first stop was, of course, the site of Grace Hospital where Houdini died on October 31, 1926 in Room 401, Corridor D. The old Grace Hospital was torn down in 1979 and replaced with the Harper Professional Building at 4160 John R St. This is part of the larger Harper-Wayne University Hospital complex, which is currently undergoing a new renovation. It struck me that, unless the streets have changed, Grace Hospital probably sat in what is now the parking lot.

After taking a few pics, I slipped inside and had a look around. In the main lobby of the larger hospital I chatted with a friendly security guard. He told me that a Staff Only area had on the wall some historical information about the building being Grace and Houdini's death. I quipped, "This is the only place he never escaped." That cracked him up, and I suspect that's not the last time that joke will be told there.


It's worth noting that directly across the street from the Harper Professional Building is this building which was probably around in Houdini's day. It's kind of cool to see a building the same size and basic style of the original Grace Hospital still on the site.


Just a few blocks away from Harper/Grace is the building that once housed Wm. R. Hamilton's Funeral Home where Houdini was embalmed. That building is still standing at 3957 Cass St., although it appears to be abandoned and may not be standing for long. And, no, I did not see this ghost.


Most people take pics of the funeral home from Cass St. (as above). But if you walk around the corner, you get a better perspective on the building and can see what was most likely the main business entrance in 1926 (below). 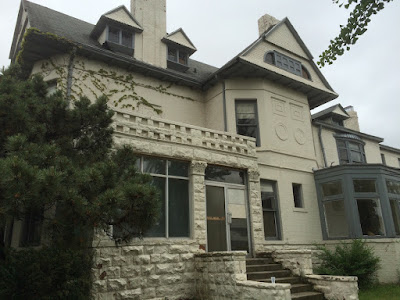 I was running short on time, so I had to skip the location of Garrick Theater, which was demolished in 1928. It took some research to find this one. It's said the Garrick stood where the David Stott Building stands today at 1150 Griswold and State St. The pic below from Google Maps shows the tall Stott Building and general area.

In May, the David Stott Building was purchased by Dan Gilbert. The plan is to rebuild a good portion of the interior. It would be fun if some reference to the Garrick could be worked into the renovation.

My final stop was the MacArthur Bridge, which in Houdini's day was the Belle Isle Bridge. This is where Houdini made his 1906 bridge jump, but the location has become more famous as being the supposed site of his fabled entrapment under the ice. The bridge Houdini jumped from that day was a wooden structure that burned down in 1915. The current concrete bridge opened in 1923. It underwent a major restoration in 1986.

I only had time for a quick photo of the bridge before I had to race to the airport and catch my flight home. Next time I'm looking forward to walking the bridge. But it struck me that, even in May, it was cold. One can only imagine how Houdini felt doing his jump in the dead of winter. 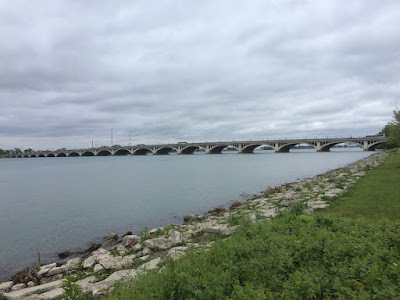 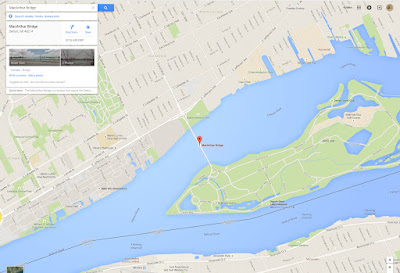