Appleton's beautiful new bronze Houdini bust will be officially unveiled in Houdini Plaza this Thursday, August 27, at an event starting at 11:30 AM. Here are the details from the "Houdini Bust Dedication" event page on Facebook: 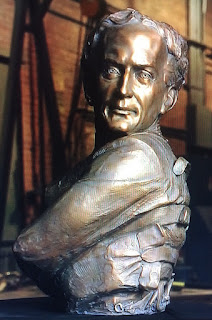 Join us for the Houdini Bust dedication event this Thursday in Houdini Plaza following the lunchtime live performance.

Featured on the History Channel's Monument Guys, the Craig Campbell bust of Harry Houdini in the throws of his iconic straightjacket escape will be unveiled to the public for the first time.

Following the musical performance at the Fountain stage, The Dangerous Fun Show will take the main stage at 12:30 (or so) to perform some Houdini-inspired escapes. Bring the kids as Mr. Peters loves to get them in the act!

DFS will be followed by a number of speakers including Nick Hoffman (History Museum at the Castle), Rob Neilson (Prof of Sculpture, Lawrence U), Amanda Stuck (WI 57th District Assemblywoman) and of course Mayor Tim Hanna.