Mentalist Jeff Newman is performing a Houdini-themed one-man show called Letters to West 113th at the 34th Annual Edmonton International Fringe Festival, August 13-23 (not to be confused with the current Edinburg Fringe Festival which also has several Houdini-themed shows). Here's a description: 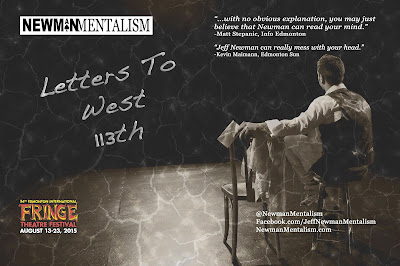 What happens when one of magic's greatest thinkers and skeptics, Harry Houdini, encounters a man that left crowds speechless, but makes Houdini question his own beliefs? Jeff recreates an act that was all but erased from history, and will have his audience gasp in amazement as they witness a spectacle rarely seen before.


According to a review in The Edmonton Journal, the act that "makes Houdini question his own beliefs" is that of Thomas Whitford, "a widowed mentalist who was so good that people suspected his wife was helping from beyond the grave." It purports to be a true-story, but it's a story I admit I'm not familiar with.

Letters to West 113th (the title is a reference to Houdini's New York home) is now playing. Showtimes and tickets can be found at the Edmonton International Fringe Festival website.
Written by John Cox at 9:08 AM

Email ThisBlogThis!Share to TwitterShare to FacebookShare to Pinterest
Tags: 278, Other magicians, Plays, Spiritualism